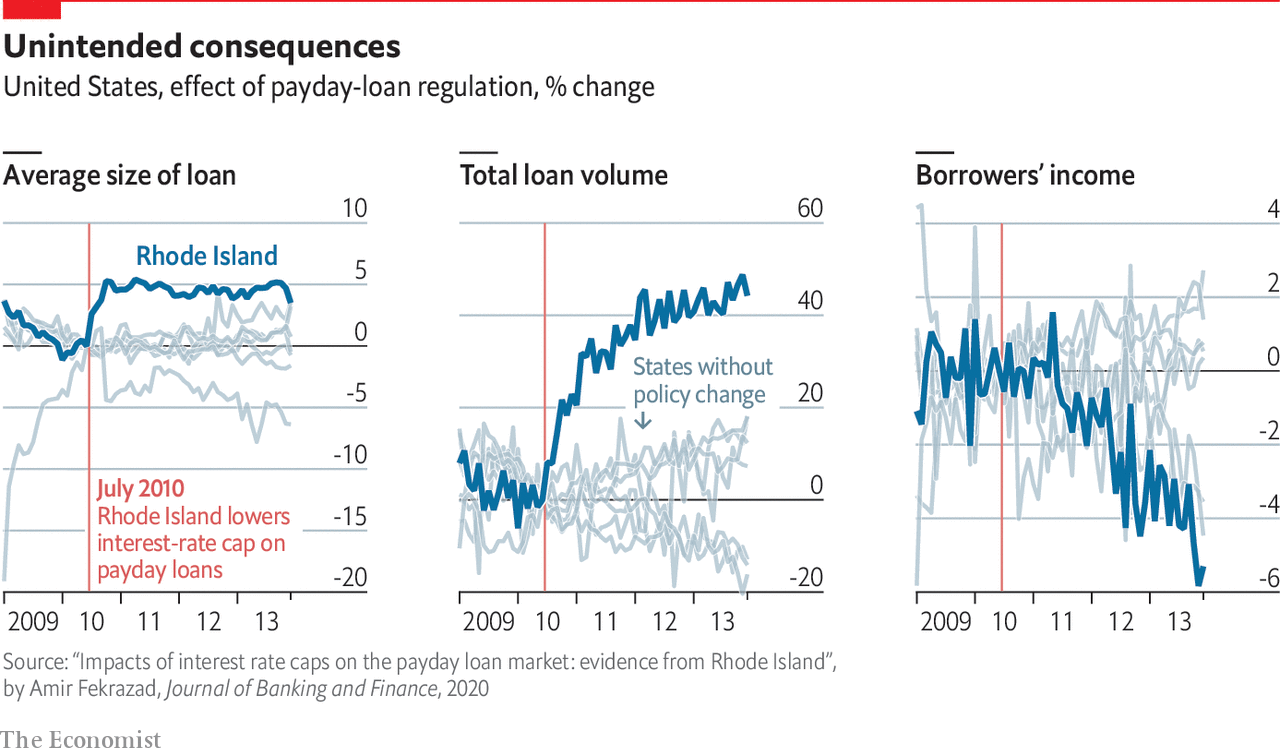 TO THE CASUAL OBSERVER, the business of lending to poor, financially unsophisticated people at exorbitant interest rates seems inherently predatory. But payday loans, as they are commonly called, are more complicated than they first appear. For one thing, these loans are rarely repaid all at once. Most are rolled over into new loans, sometimes multiple times, leaving cash-strapped borrowers caught in a cycle of debt. On the other hand, laws aimed at restricting payday loans may prevent subprime borrowers from accessing credit. Some may be forced to look for even more expensive alternatives.

A new article by Amir Fekrazad, an economist at Texas A&M University-San Antonio, illustrates just how complex the issue can become. Using a database of millions of loans made between 2009 and 2013, Fekrazad analyzed the impact of a law passed by the state of Rhode Island in 2010 which, in effect, reduced the interest rate allowed on a two-week payday loan from 15% (equivalent to an APR, or annual percentage rate, of approximately 390%) to 10% (260% APR). The law was intended to make these loans more affordable. Instead, it caused some borrowers to renew their loans more often, increasing the likelihood of default. The law also had several other unintended consequences: on average, the total number of borrowers increased by 32%, the number of loans per borrower jumped by 3.5%, and the principal of a typical loan increased by 3. %. All of this equated to an increase of about 36% in total payday loan volume. The poorest have also started to borrow. The average payday borrower’s income has fallen by about 4% (see chart).

These findings can be attributed in part to human psychology. A rational borrower considering a payday loan would weigh the short-term benefit of having extra cash against the cost of interest payments and potential default, and act accordingly. But Mr Fekrazad says many borrowers overstate the short-term benefits and understate the long-term costs, leading them to overborrow, all the more so it seems when interest rates fall. . As borrowers stay in debt longer, the interest due accumulates and the risk of default increases.

What’s the lesson? On the one hand, policy makers cannot assume that consumers are rational. Mr. Fekrazad says Rhode Island could have coupled its interest rate cap with a cooling-off period, requiring borrowers to wait a specified period (ideally, longer than one payment cycle) before taking out another loan. The state could also have forced lenders to be more transparent. Research has shown that when lenders disclose more information about the future costs of their loans, particularly how interest accrues as debts are rolled over, customers tend to borrow less. . Better-informed consumers make more rational decisions: it’s insight you can bring directly to the bank.

Get bad credit payday loans without a credit check